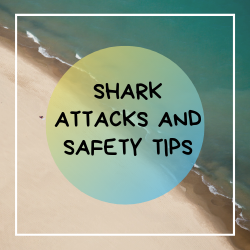 The good news is that the attacks are not usually fatal. There was one death, off shore, that was reported by the local newspaper. Otherwise, those who get bit by sharks end up needing some stitches. It's often surfers who get bit on the foot, ankle, or lower leg area. The shark most likely sees their foot in the water and mistakes it for their prey. As soon as they bite down, they usually immediately sense that it is not their prey, and they let go. This tends to leave the person needing some stitches. Some surfers even seem to feel it's a badge of honor that they have earned. New Smyrna Beach has a lot of surfers and many people visit the area for the purpose of surfing. More surfers tend to equal more shark bites.

It's also important to note that the risk of shark attacks are statewide. They are not limited to being in New Smyrna Beach. Whether you are visiting the Gulf side or the Atlantic side, the shark risks are always there. It's the same with other states that  have waters where shark can be found. This doesn't mean you should avoid swimming or going in the water in New Smyrna Beach. There are some things you can do to help reduce the risks associated with New Smyrna Beach shark attacks, including:

On average, sharks kill around 16 people per year around the world. Yet, there are around 30 million shark who are killed each year by humans. The odds of you being killed by a shark are very slim, but it's good to be aware and alert. According to the Florida Museum, there were 60 unprovoked shark attacks worldwide in 2018. There was only one unprovoked fatal shark attack in the U.S. in 2018. New Smyrna Beach shark attacks have been on the decline, but they do still happen, so always exercise caution in the water anywhere in Florida.

The Florida Museum offers additional information on shark attacks, including a yearly summary of worldwide attacks, contributing factors, your risk of being attacked by a shark, and more. To get more info, click here.

About the author: Jacqueline Bodnar is the founder and owner of Volusia County Moms. She has been a professional writer/blogger since 2004. Read her full bio here.